When people ask me why is it so difficult for Blacks to close the wealth gap between the Black collective and Whites, I point first to the obvious. It is a monumental endeavor in and of itself to overcome the Bunyanesque task of making up the ground gained by the headstart Whites enjoyed as many of their ancestors benefitted directly from the free labor of slaves, and others benefitted from reconstruction, Black codes, convict leasing, Jim Crow Segregation, Redlining and other forms of serial forced displacement.

This is not to say that Blacks are not participants in the persistent progression of our slow demise through consumerism, disunity, and financial illiteracy, but even that is a direct result of the machinations mentioned above.

Then consider the constant encroachment into the Black culture by White culture vultures to extract as much of our economic fruit as possible through laws and regulations like those mentioned in the following article. Hair braiding is a part of our culture that has existed for centuries, and while there are states that don’t require licensing for braiding, more and more states are beginning to implement licensing requirements despite the fact that health and sanitation violations among natural hair stylists are almost non-existent. This is simply another way for Whites to reach into the Black economy to enrich themselves off of something created by Blacks.

Not only are Whites enriching themselves through this practice, but they are also making it difficult for Blacks to support themselves in this industry. At some point, we must push back, not through our usual empty protests, but through a united resistance that demands the right to practice our heritage without interference where interference is not warranted.

Blacks often find ourselves in disadvantageous positions because we refuse to invest in developing a lucid perspicacity of how things work. We must develop, economic, educational, political, and social capacities that are capable of facilitating structured resistance for the purpose of creating wealth building platforms through our own creativity.

We must also stop giving away and selling our culture to others. ~ Rick Wallace, Ph.D., Psy.D.

Institute For Justice We are the national law firm for liberty.  Opinions expressed by Forbes Contributors are their own.

Ever since she was a little girl, Fatou Diouf has been braiding hair. And for almost two decades, Fatou has turned that tradition into a vocation by working professionally as a licensed natural hair stylist in Tennessee.

“I never did any other job but hair braiding my whole life,” she said. “I cannot recall a time when I did not know how.”

But in recent years, Tennessee has forced Fatou to pay a staggering $16,000 in fines, simply because she employed workers who did not have a government license to braid hair. Nor is she alone. After examining meeting minutes and disciplinary actions for the Tennessee Board of Cosmetology and Barber Examiners, the Institute for Justice has identified nearly $100,000 in fines levied against dozens of braiders and more than 30 different natural hair shops and salons since 2009. All of those violations were for unlicensed braiding; none were triggered by any health or sanitation violation.

Typically, the Board will issue a $1,000 “civil penalty” for every instance of “performing natural hair care services for clients without a license” it encounters. In addition to fining braiders who work out of their homes or unlicensed salons, the Board has targeted licensed shops, like Fatou’s.

For Fatou, those heavy fines have been “very stressful.” Under a payment plan for her most recent violations, she has had to pay over $830 a month to the state, a burdensome expense she’s struggled to cover, on top of providing for her two children, dealing with her divorce, and sending remittances to support her family back in Senegal. 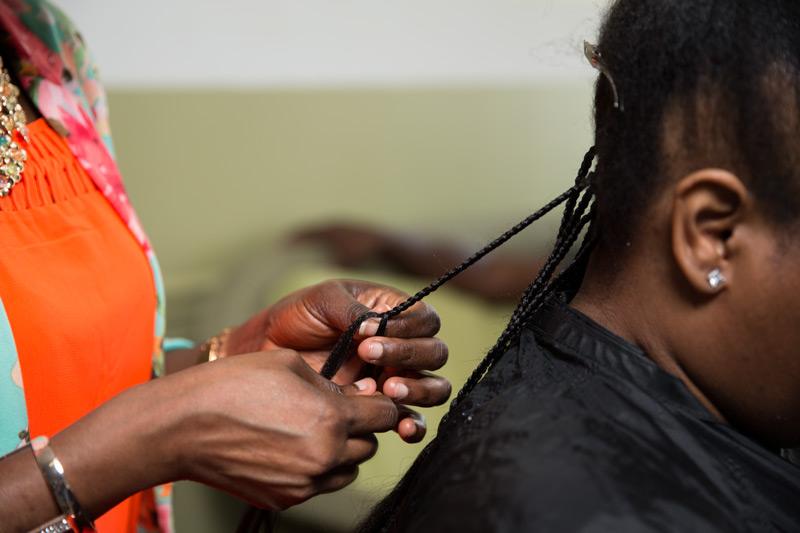 Driven by those first-hand experiences, Fatou has become of the most outspoken voices for reform. Together with the Institute for Justice and the Beacon Center, Fatou has testified in favor of a bill that would eliminate the state’s license for natural hair stylists—and the Board’s basis for fining braiders. “We can create more employment if this bill passes,” she said.

With a rich heritage dating back thousands of years, natural hair styles—which shun the use of any potentially harsh chemicals—have grown increasingly popular in many African American and immigrant communities. Today, braiders are free to work without a license in almost half the country.

But in Tennessee, only licensed “natural hair stylists” may earn a living by braiding, twisting, wrapping, weaving, extending or locking hair. Obtaining that license can be quite the ordeal. Braiders must complete at least 300 hours of coursework, which often means sacrificing the equivalent of working almost two months full-time. Across the entire state, only 3 schools offer those courses, charging anywhere from $1,500to $5,000 for tuition.

With her years of experience, completing the classes required for a state license was “mostly a waste of my time,” Fatou recalled. “We don’t need 300 hours to know how to wash a clip or a comb.”

Many of the braiders she has hired or encountered feel the same way. “They’re not going to learn something they already knew,” Fatou explained. “Why would we pay thousands of dollars just to take a test?”

As a result, the state’s license requirements and crackdowns have it made extraordinarily difficult for entrepreneurs like Fatou to find workers who have the proper authorization to braid hair. According to a fiscal note published in February, Tennessee only has 156 licensed natural hair stylists. Compare that to Mississippi, which has roughly the same-sized black population, but over 16 times as many braiders legally working in the state.

Unlike its neighbor, Mississippi does not license natural hair care. Instead, prompted by a lawsuit from the Institute for Justice, the state merely requires braiders to register with the Department of Health and pay a $25 fee. Thanks to this streamlined system, in 2016, more than 2,600 braiders had registered in Mississippi.

Unsurprisingly, braiders have flocked to Mississippi in search of better opportunity. Fatou said she has “struggled to hire braiders,” since they can easily cross state lines and work without fear. 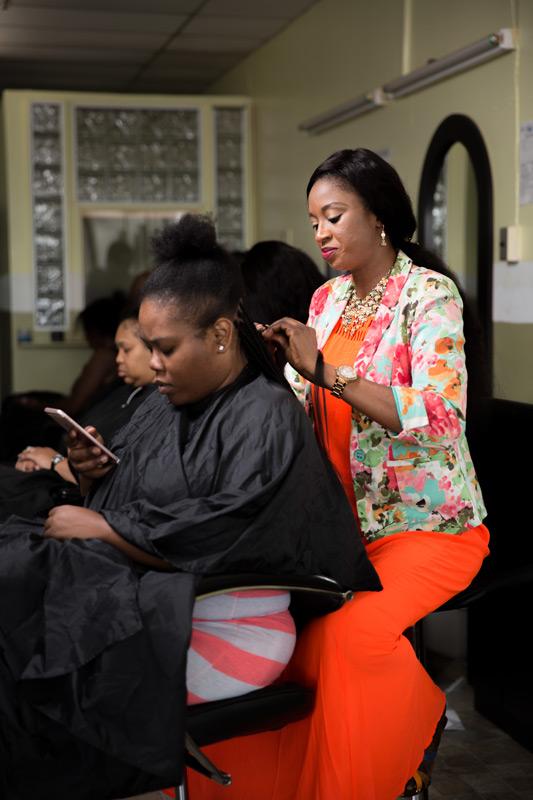 Fatou Diouf at work in her shop in Tennessee.

Fortunately, lawmakers may soon untangle the state’s mess of licensing red tape. On behalf of Gov. Bill Haslam, Rep. David Hawk and Sen. Mark Norris have sponsored HB 1809 and SB 2233, which would repeal the state license for natural hair stylists.

In an unusual twist, the Tennessee Department of Commerce & Insurance (which includes the state Board of Cosmetology and Barber Examiners) is also backing the bill. When the bill was heard by the House Business and Utilities Subcommittee last month, the Department’s own deputy commissioner, Brian McCormack, even criticized the license requirements and costs as “overly burdensome.” (Representatives from the Department denied repeated requests for comment.)

Even more ironically, some of the bill’s loudest opponents have actually come from licensed natural hair stylists, who claim the license is necessary to protect the public.

Yet according to testimony by McCormack, there have been only two health and safety complaints against natural hair stylists since 2010. In fact, the Department has “opened more than 200 administrative complaints for unlicensed activity where we have seen no sanitation violations,” he said. “That’s actually more than we have licensees currently with the Department.”

Those findings are further borne out by a 2016 report from the Institute for Justice, which analyzed complaints filed against braiders in states that have a separate license for natural hair care. “Across seven years and 10 jurisdictions, just nine complaints with health and safety issues were received for unlicensed braiders,” the report concluded. “Further, none of the complaints alleging consumer harm were verified by licensing boards.”

Since braiding is a safe practice, states are increasingly eliminating licensing requirements for natural hair care. Today, braiders are free to work without a license in 23 states, with almost half of those state reforms enacted in the past four years alone. Eight other states besides Tennessee are currently considering liberalization. Lawmakers have filed bills to repeal specialty braiding licenses in Louisiana, Minnesota, Ohio, and Oklahoma, while legislation would exempt natural hair care from cosmetology licensure in New Jersey, Missouri, Rhode Island, and Vermont.